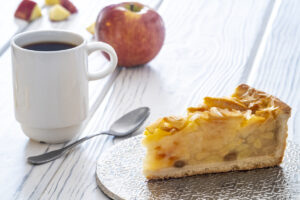 A "gala" event if there ever was one. Did you know the first apple pie recipe was printed in 1381 in England? We're told ingredients included "good apples, good spices, figs, raisins, pears, saffron, and cofyn (a type of pastry crust)."

So what do we have brewing this morning to go along with our slice of heaven?

And the flood continues. 178,622 illegal immigrants were "encountered at the border" in April, according to Customs and Border Patrol. That's up from the 172K in March, which was the largest surge in two decades. It's a 90% increase over last year.

It gets worse. Thanks to Biden's new rules restricting the removal of those in our country illegally, less than 3,000 people were deported by ICE in April.

Do the math. A net increase of 175,000 illegal immigrants have been added to America's burden in one single month.

And consider the stories. Fox News reported this week on five unaccompanied girls under the age of seven found by a farmer abandoned near the border in Texas. The farmer says the "baby girls" were hungry, crying and would not have survived in the heat.

Do They Even Listen to Themselves?

So Energy Secretary Jennifer Granholm was asked if perhaps rail cars could be used to transport gasoline to areas impacted by the ransomware attack on the Colonial Pipeline. She said: "We are looking into that but nothing compares to pipelines for transporting oil."

Yeah. Exactly. And still your boss ordered the cancellation of the Keystone Pipeline.

House Republicans Wednesday voted to remove Rep. Liz Cheney as House Conference Chair, the third highest position in the Congressional GOP. After the vote, Cheney declared she would use her energy to ensure the GOP retakes the House in 2022 and that the disastrous Biden Administration is not re-elected. No wait. She didn't do that. Instead, she said her efforts will be directed against Donald Trump. "I will do everything I can to ensure that the former president never again gets anywhere near the Oval Office."

("No, please don't!" say the beancounters at CNN. See below)

Echoing Cheney, 100 former Republican officials are publishing a letter today declaring if the GOP doesn't dump Trump, they're going to form a new party.  Judging from the names on the list, the party symbol will be a dinosaur fossil.

CNN in a Disastrous Freefall

CNN is sinking so fast you'll need robot submersibles to recover the wreckage. As media analyst Joe Concha notes, the once-great network has lost fully two-thirds of its audience since January. Harvey Weinstein didn't have as fast a fall from grace.

The drop CNN is experiencing is profound. On Friday, not one program broke 900K total viewers. Prime averaged less than 800K overall.

For comparison, the network averaged 2.74 million viewers in January, so we're talking about more than two-thirds of the audience – gone. https://t.co/a4f14QXStm

The problem with being all Never Trump all the time is when there's no Trump there's no reason to watch. (I mean, does anybody actually enjoy Don Lemon or Chris Cuomo?)

Bongino On the Go

Speaking of Bongino, the former Secret Service agent-turned-commentator, starts his new syndicated radio show May 24. The show will broadcast in Rush Limbaugh's old timeslot 12-3 eastern. One could say he's replacing Limbaugh, but nobody replaces Rush Limbaugh. His first guest will be former President Trump.

But wait! There’s more. Fox News announced Wednesday that Bongino is getting his own weekend show. He’ll be filling the Saturday at 10 p.m. slot previously held by The Greg Gutfeld Show. Gutfeld, of course, moved to weekdays at 11 p.m. Eastern with his new show Gutfeld!. Trey Gowdy is also getting his own weekend show on Fox News. It’ll air Sundays in place of a rerun of the Chris Wallace-helmed Fox News Sunday.

Oh, by the way, Gutfeld’s show is drawing an average of 1.515 million viewers. Or 600K more than CNN’s best. And he’s beating Jimmy Fallon’s Tonight Show and is in shouting range of Kimmel and Colbert … despite Fox News being in fewer homes.

Michigan Gov. Gretchen Whitmer finally copped to ignoring her own edicts. At a presser Wednesday, she admitted she indeed had traveled to Florida in March to see her dad. This came at the same time she was telling her citizens to stay home and not go to Florida for Spring Break.

Of course, she defended the trip, saying it wasn't a "vacation" or a "gift." Her father needed her help.

Yeah, we'd give her some slack, except this is the same Whitmer who stuck other people's fathers and mothers in nursing homes with COVID patients, and whose husband was allowed to flout her draconian lockdown rules. She also ignored COVID risks and flew to DC to gather for the Biden Inaugural.

Gotta End With a Bit of Inspiration

The world got you feeling cranky? Stream contributor Jim Tonkowich admits he's been "Mr. Crankypants, But Thankfully I Found the Antidote." Check it out.

Also, James Robison shares a prayer offered 25 years ago by a Kansas pastor opening a session of the state legislature. An invocation that resounds even louder today.

Tired of everybody feeling the need to apologize for every little thing that Wokestapo insists we apologize for? Then check out this cheeky video from our friends across the pond at BBC Comedy.

Have a great Thursday, and if you like what you're reading on The Morning Brew, PLEASE share with your friends!

The post The Morning Brew for Thursday, May 13, 2021 appeared first on The Stream.