A Graduation Address to My (Almost) 18-Year-Old Self 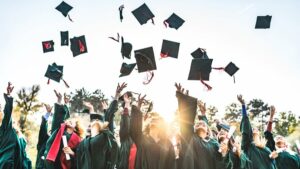 We at The Stream have been challenged to come up with the commencement address we would give ourselves if we could go back to our high school graduation. Well, why not?

First off, I want to thank you, the Oxon Hill High Class of 1980, for giving me the opportunity to crash your … I mean, our party. I promise to be brief. I can already see in the front row my younger self getting fidgety. Albert, sit up straight! Sure, you may end up spending most of your life in radio, but somebody someday may want to stick you in front of a TV camera and you don’t want to look like a sloth.

I see the surprise in your eyes. Believe it or not, folks, that guy is going to be a professional writer. (A LOUD THUNK ECHOES ACROSS THE ARENA) Uh, oh. Can someone please get some water? It looks like the entire English department faculty has fainted.

Don’t be surprised that Albert is surprised. Studies show that 70% of you will change your major during your college career. So don’t fret if you don’t yet know your calling. But please, please, find out. Pray. Explore. Pray some more. Challenge yourself. Don’t be a piece of driftwood floating through your own life. That’ll only get you stuck on some bank far upstream from where you otherwise are supposed to end up.

See, we are “God’s handiwork, created in Christ Jesus for good works, which God prepared in advance for us to do.” The way has been prepared. You don’t have to stress it. You just have to find it.

A lot of speakers will tell you to “Follow your dreams.” I’m not. I’m telling you to follow your reality. God’s vision for your life is reality. Vision requires focus. Dreams just require a school desk you can fall asleep on.

Too much “dreaming” leaves you not enough time awake. And you must be awake.

Albert, I know your mind is already drifting to the upcoming beach trip, but I need you to listen to this part carefully. Get out of your head! I know the real world is a place still searing with grief, and you think your imagination is a “safe space.” It is not. Trust me. God could hand you the Golden Ticket on the way to the beach and you would be oblivious.

Here’s a tip: Read a chapter of Proverbs a day. Yes, every day. Reading that chapter will be like lifting weights for your soul.

Oh, a quick bit of advice: Copyright that phrase “safe space.” Do it and you can afford a mansion on the Bay. AND a townhouse in Old Town, Alexandria. PS. Invest in Apple. Do not invest in Enron. Most important, invest in the people you care about.

As awake as you need to be in your personal life, it is also crucial to be aware of the world. Admittedly, Albert, being obsessed with the JFK assassination and living through Watergate has given you a healthy awareness of how corrupt those in power can be. But you need knowledge.

No disrespect to the teachers here, but you really don’t know much of anything. You think Khmer Rouge is something women put on their face. You don’t know the difference between sharia and sangria. You’ve got a head crammed with trivia, but you don’t have knowledge.

But even beyond knowledge, you need wisdom. Seek wisdom with the fervor you do chocolate.

Here’s a tip: Read a chapter of Proverbs a day. Every day. Yes, it’s 1980, so I can still talk about reading the Bible at a Commencement Address. Reading that chapter will be like lifting weights for your soul.

Trust me, guys. You are going to need wisdom and discernment to deal with the jaw-dropping amount of info and sensory input that you will have to process in the years to come.

A few years back Andy Warhol said “In the future, everyone will be famous for 15 minutes.” I can tell you Warhol came pretty close. Shockingly close. Too close. Notoriety is the currency of the 21st century.

Today, I’ll add a tangent to Warhol’s adage: “In the future, everyone will be certain for 140 characters.”

How certain? Look around you. Spot your friends? Chances are pretty good at least one of them will “de-friend” you because they are certain your certainty is certainly certifiable. Many of you will spend part of each day arguing and fighting with family, friends and even utter strangers over matters that will be forgotten in hours.

Jesus said “Love your neighbors.” The day is coming when Jesus will be happy if you just cut them some slack.

Take it from someone who will spend decades being paid to write comedy. (FURTHER LOUD THUMPS. THEN A MURMURED: “Well, he is always mumbling odd things.”) Take it from me: Insults are easy. Snide is simple. But cutting down is no match for building up.

I pray that you will be awake, but awake with grace.

The difference between superstardom and obscurity is simply one decision at one audition on one average day.

Los Angeles will teach me this: The difference between superstardom and obscurity is simply one decision at one audition on one average day. Or dress size. Also, one day you will be kissed on the lips by a big (and beautiful) TV and movie star. A couple days later you will meet an old man whose discoveries as a young doctor revolutionized children’s health care. Who’s the real star?

Oh, but surely there are people who are just the Bomb. So famed and fabled as to be unapproachable. Right? Well, one day a woman you’re dating will casually share typical dull, humdrum talk involving her ex. “Oh, that’s Bob’s dog. That’s an old picture of Bob’s kids. Yeah, Bob and I used to go to that restaurant. It’s pretty good.” Normal stuff. Normal guy. Normal Bob. Then, a few months later, the shock: “You do know Bob is Bob Dylan, right?” Yes, the one guy on the planet I’d always said I’d be too intimidated to talk to is Bob with the mangy mutt.

Works the other way around too. A few short years from now a friend will report her college pal had landed a gig at the White House. “Oh, my God,” she’ll say, half in horror. “We’re now running the country.” More shocking: A bunch of years beyond that, Comedy Boy will have the ear of a man who has the ear of the President of the United States. (ONE FINAL MASS THUNK.)

So, all you future big-time players out there, stay humble. The most sinister example of fake news is believing your own press.

Let me leave you with a couple last bits of acquired wisdom I’ve gathered in the years to come:

When someone declares a religious war on you, believe them.

Avoid dating anyone who says they want honesty in a relationship. Such a thought does not occur to truly honest people.

Learn how to fix cars. It’s a lot wiser use of time and resources than trying to fix people.

A lot is coming your way. A lot that will rock your world and shake your foundations. Be wise, be agile, be gracious … and be of good cheer.

Live awhile away from the D.C. shadow, away from the Coasts. Sure, you’ll miss the beach, but avoid the heartland and you’ll miss plenty more. A stranger in a drive-thru saying “Have a blessed day” means more than a night with a thousand celebrities.

And fear not, Oxon Hill Class of 1980. Disco won’t last forever. (STANDING OVATION.) But the good disco songs will.

A lot is coming your way. A lot that will rock your world and shake your foundations. Be wise, be agile, be gracious … and be of good cheer.

And if you think an actor getting elected this year is a hoot, wait ’til you see what America cooks up in 2016. It’ll be “YUUUUGE.”

Al Perrotta, Oxon Hill Class of 1980, is the co-author of the newly released The Politically Incorrect Guide to Immigration.

The post A Graduation Address to My (Almost) 18-Year-Old Self appeared first on The Stream.