White Supremacists Our Most Dangerous Threat? A Whiter Shade of Tall Tale 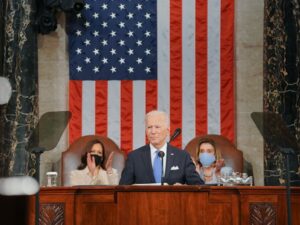 In 2019 I wrote in these very pages about the lie that "white supremacist terrorism" is the greatest threat to Americans. Back in those pre-plague days, it was mostly the media spreading this myth. But now, it's the President of the United States. Last week Biden, in his de facto State of the Union speech, claimed that "white supremacists" are "the most lethal terrorist threat to the US." In fact, Islam's jihadists pale in comparison. And Biden even adduced the federal intelligence agencies to support this contention.

The problem: it's not even remotely true.

First, the global picture. The US State Department has published, for decades, a list of foreign terrorist organizations. As of today it has 72 groups. Fifty-six of those, or 78%, are Islamic ones. It also includes two new ISIS affiliates (Democratic Republic of the Congo and Mozambique). These were recently added by the Biden Administration. Of the remaining 16, seven are nationalist-separatist. Seven are Marxist. One is Jewish. One is eclectically apocalyptic (Aum Shinrikyo). None is "white supremacist."

(This is defined by the Department of Homeland Security. It includes "individuals who seek...through unlawful acts of force or violence, to support their belief in the intellectual and moral superiority of the white race over other races." And the Democrats and media constantly conflate "white" with "right-wing.")

Other country's lists are similarly chock-full of Muslim organizations. The United Arab Emirates' terrorist manifest contains 86 groups, 85 of which are Islamic. (That must make the UAE's Muslim rulers Islamophobic, I suppose.) The UK proscribes 55 terrorist groups, 47 of which (85%) are Muslim. All the entities which Communist China deems terrorist are Islamic ("East Turkestani") ones. And so it goes. And anyone who thinks "foreign" terrorism can't hit America has been asleep, or hiding in his basement, far too long.

Then there's the FBI's "Most Wanted Terrorists" directory. Ninety-two percent of folks there (23/25) are Muslim. The two exceptions? A white vegan/animal rights extremist, and a black female cop-killer. The Bureau also puts up a "Domestic Terrorism" subpage. As you might guess, none of the perps is wearing a MAGA hat or a Heil Hydra QAnon shirt. Four of them are black -- three men, one woman. One of the former is Muslim, and all the males hijacked planes way back when Three Dog Night was big.

The black female helped rob a Brinks truck, killing some cops, then fled to Cuba. Another four are white women. But none are Baptist home schooling moms. Two are Communists, one an Animal Liberation Front fanatic, and one -- I kid you not -- a Black Panther. All engaged in violence of some sort. Three of these wanted domestic terrorists are Hispanics: one a Puerto Rican separatist and bomb-maker, the other two plane hijackers.

Yes, there is ONE white male herein. But he's a Leftist who helped bomb the University of Wisconsin years ago. So it's doubtful he's pining for another Trump term.

The Leftists in Media and Government Engage in Wishful Thinking

So just how, exactly, do the intel agencies, think tanks, and media make the case that "white supremacists" constitute the biggest danger to this country? By obfuscation and fudging the numbers. And overall bad faith "calculations." Read this recent article by a Brookings Institute "analyst." No better example of Establishment/Deep State thinking exists. (Wait, did I just out myself?)

You will search in vain for any actual numbers or hard data -- as I provided above. Rather, you'll find innuendo, vast over-generalizations and the implication that legitimate political concerns about, say, immigration are dire threats to the Republic. The DHS doesn't provide a list of these alleged "white supremacist" organizations. But it does have a website that links to the discredited Southern Poverty Law Center. This is the entity that slurs any group whose members read the Bible and take it seriously as "hate" group.

Fudging the Numbers, Part I

The most reputable aggregator of terrorist incidents is the University of Maryland's Global Terrorism Database. It is a wealth of information. But is all of it accurate? For example, the 2017 Las Vegas mass shooting by Stephen Paddock is deemed "right-wing terrorism" by the GTD. So his 60 victims go into the ledger as right-wing/"white supremacist" ones. While the FBI's official position is that Paddock's motive and ideology remain unknown, government reports drawing on the GTD lump his death toll just precisely where it can help Democrats' partisan propaganda.

Contrast the treatment of Robert Aaron Long, the Atlanta-area spa-worker shooter who killed eight, with that of Ahmad al-Issa, the Boulder gunman. The media and Democrat leadership immediately exploited the former as caused by white "anti-Asian hate." (Despite the research into the topic proving that most such crimes are carried out by black, not white, Americans.) The latter was Muslim and said to have been inflamed by "Islamophobia." But no motive has yet been imputed, and the media has stopped reporting on that attack which killed 10.

Or consider that several Islamic jihadist attacks in recent years are not classified as such, and/or not deemed domestic terrorism. The 2016 St. Cloud mall stabbings, done by a Kenyan Muslim, still have no motive assigned. Despite his allegedly asking people if they were Muslim before stabbing them. This leaves it out of the realm of Islamic terrorism. The December 2019 killing of three US naval aviators at Pensacola by a Saudi was chalked up to "Islamism." But since the perpetrator was not American, it wasn't labeled as domestic.

There's another approach to pump up the alleged problem of right-wing/"white supremacist" terrorism. Hyping the percentage increase in "incidents" and deaths, rather than the actual numbers. (On this and related issues, see the GTD's "Global Terrorism Index 2020.") Thus "in North America, Western Europe and Oceania [?], far-right attacks have increased by 250 per cent since 2014, with deaths increasing by 709 per cent over the same period." That's 89 deaths in 2019, in real numbers. (And 51 of those were in the single New Zealand attack.)

I'm a historian, not a mathematician. But for 89 to represent a 700% increase, the baseline was pretty low. Then a few pages later the GTI notes "the deadliest form of terrorism in the West over the past two decades has been religious terrorism, which has almost exclusively taken the form of radical [sic] Islamist terrorism." And on the very next page: "Historically, the majority of politically-motivated terrorism in the West has been carried out by far-left groups and individuals." Which, if and when the 2020 data is counted honestly, will no doubt be the case once again, considering how many Targets Antifa and BLM looted and burned.

Finally, most metrics start with 2002 as the baseline. Even GTI 2020 does this. It's a neat way to leave out the 9/11 attacks with their 2,997 deaths. The Islamic apologists have been doing this all millennium. Biden, that same night, also said that the Capitol Hill riots were "the worst attack on our democracy since the Civil War." Biden's teleprompter knows very little history, it seems. Several hundred unarmed protestors stupidly broke into the halls of Congress and took selfies. This was worse than Reconstruction? The violent Bonus Army protests? The Watts riots? The Days of Rage? The 9/11 attacks?

They Can't Handle the Truth

But what else do you expect from the man who, as Vice-President, actually opposed the raid that President Obama (to his great credit) sent to kill Usama bin Laden? Rabbi Dr. Shmuel Klatzkin correctly slammed the modern Democrats. They have become "ideologues [who] only get more desperate when confronting realities that conflict with their view. They have never been fond of letting their ideology be put to the test."

Whether "systemic racism," the "Green New Deal," the utility of masks -- or "white supremacist" terrorism. There are no metrics -- zero, zip, nada -- supporting President Biden's ludicrous claims. The data, in fact, clearly shows that both globally and domestically (as if there's a difference anymore), the jihadists of Islam are far and away the most lethal danger. As I pointed out in 2019, all right-wing terrorist groups' and individuals' death toll, since 1993, is 1.5% that of the jihadists. Four Islamic groups alone (Taliban, Boko Haram, ISIS, AQ) killed over 7,000 people in 2019.

Biden, the Democrats and the media insist Buffalo Hat Guy poses the greatest threat to America. But in point of fact, the usual post-2001 suspects still do. The ones toting AK-47s who take the Quran literally. And no amount of woke propaganda will change that.

Timothy Furnish holds a Ph.D. in Islamic, World and African history. He is a former U.S. Army Arabic linguist and, later, civilian consultant to U.S. Special Operations Command. He's the author of books on the Middle East and Middle-earth; a history professor; and sometime media opiner (as, for example, on Fox News Channel's War Stories: Fighting ISIS).

The post White Supremacists Our Most Dangerous Threat? A Whiter Shade of Tall Tale appeared first on The Stream.