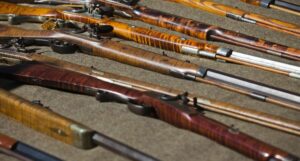 President Joe Biden falsely suggested that Americans who purchase firearms at gun shows don't need to first pass a background check prior to the transaction.

Biden said background checks aren't required for firearm purchases at gun shows during his remarks at the White House Thursday. However, federal law already mandates firearm dealers to initiate a background check on prospective buyers at stores, gun shows or anywhere a transaction may occur, according to the National Rifle Association Institute for Legislative Action.

"Most people don't know that you walk into a store and buy a gun, you have a background check," Biden said during the ceremony Thursday, in which he announced a slew of executive actions on gun violence. "But, you go to a gun show, you can buy whatever you want -- no background check."

BIDEN: "You go to a gun show, you can buy whatever you want–no background check." pic.twitter.com/TbvfDPEwlp

The Brady Handgun Violence Prevention Act of 1993 established the National Instant Criminal Background Check System, which is maintained by the FBI and is able to determine a person's criminal history. The legislation requires licensed firearm sellers to conduct a background check through the system before every sale.

"There is a huge loophole in federal law, but it isn't for gun shows," UCLA law professor Adam Winkler told Politifact in 2016. "What is called the gun-show loophole is misnamed. It should be the 'private sale loophole' or the 'background check loophole.'"

The White House unveiled a series of proposals Thursday aimed at tackling gun violence including federal "red flag" legislation that would allow family members or police to ask a court to bar some individuals from accessing firearms. The Biden administration also announced proposals to prohibit "ghosts guns," or hard-to-trace kits that allow people to assemble a firearm, and to restrict the use of "braces" that stabilize a handgun.

"This Administration will not wait for Congress to act to take its own steps -- fully within the Administration's authority and the Second Amendment -- to save lives," the White House said in a statement.

The post Biden Falsely Claims That at a Gun Show ‘You Can Buy Whatever You Want — No Background Check” appeared first on The Stream.