Pope Francis Tries to Rehabilitate Judas, Part II: Mercy for Judas the Betrayer, But Not for Trump the Wall Builder 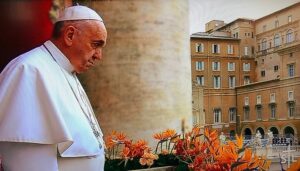 In Part One of this column, I wrote about Pope Francis' use of the Vatican's own newspaper to plant in believers' minds the following ideas:

There wasn't space for a third point. Francis used his account of Judas' "repentance" to get in a dig at traditional Christians, who cling to things like ... the words of Jesus, the teachings of the Church, even the dictates of reason and Natural Law. Francis said in a 2017 interview:

Judas is a difficult character to understand; there have been so many interpretations of his personality. In the end, however, when he sees what he has done, he turns to the 'righteous,' to the priests: 'I have sinned: I handed over an innocent man to be killed.' They answer him: 'What does that matter to us? That's your affair.' (Matthew 27:3-10) Then he goes away with that guilt that suffocates him.

Here Francis speaks of the "righteous" Pharisees and Sadducees sarcastically. He used similar language in the debate over whether the Catholic church should continue its apostolic practice of rejecting divorce and remarriage. (At least in principle -- leave aside the suppurating scandal of easy annulments, which Francis has made even easier to get, when either spouse wishes for one.) Francis repeatedly described as Pharisees, or "doctors of the law," Catholic theologians who wished to cling to the literal reading of Jesus' own words regarding divorce.

Ironically, Francis attributed "mercy" to modern liberal Catholics who'd have the church bless ... the actual practice of the literal Pharisees Jesus argued against. That is, permitting men to casually cast off their wives. So the Church could conform to the world, and incense Caesar's practice of no-fault divorce with festive second church weddings.

Read Catholic theologian's John Gravino's sobering three-part series on how Francis weaponizes his own version of Jesus' "mercy" to make room for active homosexuals to gain power and influence in Catholic seminaries and parishes, under the false rubric of "inclusion."

Francis' rhetoric of "mercy" proves as always selective. He offers it to sinners whose offenses mirror the political leftists and globalists whom he sees as allies. Hence actual abortionists like Emma Bonino, global abortion advocates like Jeffrey Sachs, and pro-choice US politicians like Bernie Sanders and Joe Biden, all receive gentle treatment, praise, even invites to the Vatican. This despite the fact that none of them have shown any evidence of repentance. Imagine the Father slogging all the way to the pig-sty to offer the Prodigal Son a hearty “Attaboy!,” and a revised will disinheriting his priggish Older Brother. That’s Francis’ model of “mercy.”

Francis has repeatedly flirted with moves to legitimize same-sex unions, though he recently disappointed his biggest fans by letting the Vatican issue a document to the contrary. I've no doubt Francis calculated this as a bridge too far at the moment, and quietly told his allies to wait a little longer, as Barack Obama did to advocates of same-sex marriage in 2008.

Francis offers no such mercy to citizens worried that immigration into their countries has spiraled out of control. Remember how he denounced Donald Trump and his supporters who favored a border wall as "not Christians." He said the same of anyone, anywhere, who manufactures weapons for anybody. Francis emitted this pearl in the course of a speech where he damned Franklin Roosevelt and Winston Churchill for not bombing the tracks to Auschwitz using ... weapons, which Francis had just said they shouldn't have had. In the very same speech.

A Machiavellian Leftist Dressed as a Shepherd

We're not dealing here with a well-meaning, honest pastor, but a Machiavellian Peronist politician, who speaks out of both sides of his mouth. His "yes" never means yes, and "no" never means no. Instead, his statements and actions are more like sophisticated chess moves. They're sallies in a battle for dominance within the institutional church. Not that Francis apparently cares about that church for its own sake either. Instead he wields it as a weapon in the battle that really matters: for control over Western countries and their vast wealth and influence.

So Francis wants us to consider that Judas might be a saint, but offers no glimmer of empathy to conservative, pro-life voters in the US and other countries. They are the Prodigal Son's merciless elder brother, the callous Sadducees who threw Judas to the wolves, the self-righteous Pharisees who wished to stone the adulterous woman. They deserve whatever Google, Facebook, Biden, and the Chinese Communist Party have in mind for them.

Shall We Clean the Bergoglian Stables?

All this is so squalid and obvious you might be tempted to just stop reading here. Indeed, I'm tempted to just stop writing. I've hit the minimum word count, and could just toddle off to enjoy the rest of my Thursday reading The Complete Works of P.J. Wodehouse. (Only $2 on Kindle!) Compared to Francis' statements, they're edifying lectio divina.

But no. Dig deep enough in the muck of the Bergoglian Stables and I think we might find a pony. Not a live pony, alas. This manure is just too toxic. However, the sophistries Francis used in this particular chess opening point to some deeper, more interesting issues in Christian history and thinking. They cast a jaundiced light on enduring temptations Christians face. Those snares appear in the work of a Church Father (Tertullian), a brilliant but unbalanced philosopher (Kierkegaard), and the Argentine literary genius Jorge Luis Borges -- who just happens to be one of Pope Francis' favorite writers.

No space for that here. This column just grew a Part III. The still, small voice of P.J. Wodehouse is calling me to reflection.

See Part I of this column here.

The post Pope Francis Tries to Rehabilitate Judas, Part II: Mercy for Judas the Betrayer, But Not for Trump the Wall Builder appeared first on The Stream.