The Unholy Saturday of Transhumanism 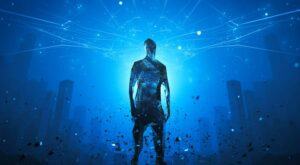 In 2014 we published a book meant as a warning, that instead proved grimly prophetic. The Race to Save Our Century pointed to the causes of the genocides in that epoch in various forms of "Subhumanism." That's the term we used to describe false theories of human life such as Racialism, Utilitarianism, and radical Individualism, which planted the seeds for massive waves of destruction. But of course those promoting such theories, and the Enemy who goads them, would never label them honestly. Nobody ever proclaimed himself a Subhumanist.   !function(r,u,m,b,l,e){r._Rumble=b,r[b]||(r[b]=function(){(r[b]._=r[b]._||[]).push(arguments);if(r[b]._.length==1){l=u.createElement(m),e=u.getElementsByTagName(m)[0],l.async=1,l.src="https://rumble.com/embedJS/u9lhyj"+(arguments[1].video?'.'+arguments[1].video:'')+"/?url="+encodeURIComponent(location.href)+"&args="+encodeURIComponent(JSON.stringify([].slice.apply(arguments))),e.parentNode.insertBefore(l,e)}})}(window, document, "script", "Rumble");

Rumble("play", {"video":"vckw8z","div":"rumble_vckw8z"});   Instead, the prophets of these new and false gospels claimed that they'd found the secret to Superhumanism. That’s an alleged improvement on the Classical and Christian picture of man. No matter that post-Christian theories always took a partial, selective view of what life really means. Then fetishized that aspect like some bloodthirsty pagan idol. They always came to us labeled as the fruits of the latest "Science," or a wave of liberation, a revolt against "old-fashioned," "tired" scruples which the young and the vigorous chafed at.

We should probably reissue the book with an entirely new chapter. The newest and surely the darkest, most vicious form of Subhumanism yet has stepped forth into the light. It calls itself, boldly, Transhumanism. Put simply, this is the movement to employ futuristic technology to cast off completely man's biological basis, and assume the role of a god. The great political philosopher Eric Voegelin warned the world in the 1930s that the Nazi and Communist movements partook of the "Gnostic" spirit. Each of those armed ideologies promised to transform the human race -- the first via racial/biological superstitions, the second through outdated and discredited economic theories. Each one was built on lies, and for all the damage it did, eventually collapsed.

The new movement's program is as well-suited to fool people in our time as those two movements were in theirs. Transhumanism doesn't promise a future for our children as part of a "master race" in a world purged of "subhumans." Nor an indolent Communist paradise where the State has withered away and all can be happy dilettantes.

Instead, Transhumanists offer what post-modern man really desires: A limitless life for himself, without any need or room for children. Instead of a collective Utopia for future generations, Transhumanism promises that people today -- at least the richest members of the richest countries on earth -- can avoid aging and death.

We can change sex at will, invent new genders for fun, and cast off the limits and burdens of mammalian biology. Eventually our spirits will no longer be chained to these aging bodies, doomed to decay. Instead they will (somehow) be transferred to long-lasting, easily upgraded silicon, connected by fiber optic cords to whatever hubs we choose from. Each of us can design his own personal Matrix, incarnate as whatever avatar best suits us at the moment. One advocate of Transhumanism, Yuval Noah Harari, proclaims with glee: "Homo sapiens don’t have much of a future left. We are probably one of the last generations of homo sapiens."

The Antichrist in the Tomb

This weekend we mark the day when Jesus stood in for mankind and nailed its sins to the cross. Then He descended into the grim and shapeless Hades where fallen men before him, cut off from God, went after death. He harrowed this "hell," and welcomed the souls of the just to Heaven. He emerged from the now-empty tomb in a body glorified and restored. As Church fathers reflected, God became man so that man might become God. This not in the sense of displacing Him, as Satan hoped, but of rising with Him and living with Him forever.

Transhumanists have hijacked many of Christian faith's hopes and promises. They offer limitless life, abundant beauty, and some attributes of divinity. The price, however isn't repentance, love of neighbor, humility and service. Instead it's assessed in cold hard cash -- or maybe Bitcoin. Even if its implausible promises could be fulfilled, they would only be affordable for a tiny slice of mankind. The rest must be left behind.

Transhumanist ethics teach us to harden ourselves to the cost. We must pass coldly by the medical dumpsters where aborted babies end up. Their organs and cells, in fact, might be crucial to making cyborgs -- as they are for making vaccines. We cannot let old-fashioned scruples prevent us from using armies of slaves -- as the Chinese do the Uyghurs -- to construct our brave new machines. There's no reason to fear that the mass social experiment in Transgenderism, conducted on our children, will leave behind millions of victims (sterilized, mutilated, subject to cancer thanks to massive hormone abuse). If you want to make mankind an omelet, you'll have to break some eggs.

The new Frankenstein's monster that promises to replace redeemed humanity as the reigning Lord of the Earth still sleeps for the moment. The time isn't quite right. The machines just aren't ready. But the wizards are working hard to fashion the perfect frame for post-human, post-Christian men-become-gods. Its body rests in a cave as Christ's did, waiting for the Enemy to raise it and release it on the world.

It won't have the kind eyes of Jesus, greeting the pious women and the apostles. Instead, in the words of W.B. Yeats, expect:

A shape with lion body and the head of a man, A gaze blank and pitiless as the sun ... [T]wenty centuries of stony sleep Were vexed to nightmare by a rocking cradle, And what rough beast, its hour come round at last, Slouches towards Bethlehem to be born?

The post The Unholy Saturday of Transhumanism appeared first on The Stream.