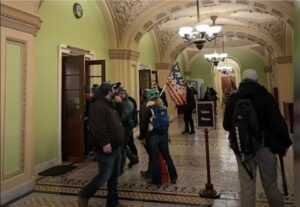 The Capitol Hill security breach on January 6 was reported as an "insurrection," a "threat to our democracy" and an attempt "to overturn the 2020 election." House Speaker Nancy Pelosi, after failing to provide adequate security for President Trump's rally -- he had approved thousands of National Guard troops for the event, which she did not use -- overreacted spectacularly, bringing in the Guard after the fact and ordering the installation of tall fencing topped with razor wire all around the Capitol area.

President Trump was accused of inciting the "rebellion" and even impeached for this (even though we know it was impossible for those who entered the Capitol that day even to have heard Trump's speech). The message to Trump supporters was loud and clear: we see you as a threat.

What Kind of an “Insurrection” Is This?

Don't misunderstand: I have said from the first that it was stupid and wrong to get out of line and enter the Capitol that day, let alone to cause vandalism and attack Capitol Police. A woman was killed. And those who participated in any way gave Biden's political team a priceless gift -- an excuse to wrongly tag all Trump supporters as part of a rowdy mob that needed to be held in check.

But, really, what kind of an "insurrection" is it when not one firearm is confiscated? Were they seriously trying to overthrow the United States government? With what? A few baseball bats and flagpoles? The idea is ludicrous.

And now, with hundreds of cases clogging the courts in Washington DC, we're seeing that most of these deal with little more than trespassing. To be sure, some will be charged with more serious crimes, but many of the Trump supporters who walked into the Capitol Building that day had no intention of breaking the law and didn't even think they were. At some entrances, security was so lax that police were just letting them walk right in. In one such case, a man and his mother simply walked into the Capitol. They were arrested in January and have been in jail all this time (!), but a federal appeals court has said their case "needs a new look." Thank goodness; these people pose no threat.

In light of this, Politico ran a piece on Tuesday that it probably pained them to include, headlined "Many Capitol Hill Rioters Unlikely To Serve Jail Time."

Subhead: "The cases could embarrass the Biden administration, which has portrayed the Jan. 6 siege as a dire threat to democracy."

Of course, they make up for having to tell this story by using a photo that confirms their view of Trump supporters, as it shows a few of the rowdiest. And -- oh, no! -- they're holding American flags, which is bound to "trigger" many of their readers.

Authors Josh Gerstein and Kyle Cheney break the sad news that DC prosecutors in federal district court are needing to dispense with the large number of low-level cases related to the Capitol breach, and that:

…in recent days, judges, prosecutors and defense attorneys have all indicated that they expect few of these 'MAGA tourists' to face harsh sentences.

One reason for this:

Although prosecutors have loaded up their charging documents with language about the existential threat of the insurrection to the Republic, the actions of many of the individual rioters often boil down to trespassing.

The authors quote Erica Hashimoto, a former public defender who is now a law professor at Georgetown University, who said,

One of the core values of this country is that we can protest if we disagree with our government. Of course, some protests involve criminal acts, but as long as the people who are trying to express their view do not engage in violence, misdemeanors may be more appropriate than felonies.

The Biden administration exaggerated the January 6 "insurrection" to such an extent -- Biden himself has said it "borders on sedition" -- that it's going to be challenging for them to deal with the many light sentences likely to be handed down. Attorney General Merrick Garland has called the event "a heinous attack that sought to disrupt a cornerstone of our democracy, the peaceful transfer of power to a newly-elected government." (Really, all they really wanted was a transparent vote count.) And, as the Politico article reports,

So, what are they going to say when scores of people receive their verdict of "guilty"…for trespassing? Unlawful presence? Disrupting official business? And nothing more sinister than that?

You can tell they're in trouble politically when the narrative starts changing, especially when it goes to the subject of race, and that's already happening. For example, in the Politico story it says,

The resolution of the more mundane cases…presents acute questions about equity, since most of the defendants are white, while misdemeanor charges are often a vexing problem for minority defendants in other cases.

The discussion will become about that; you watch.

Of course, they'll also capitalize on the relatively small number of serious charges that stem from this, but those could take many months or even a year to come to trial.

It should be noted that in telling this story, Politico is itself guilty of exaggerating what happened that day, by saying without elaboration that it left five people dead. The writers surely know that there was only one death conclusively associated with the "invasion" of the Capitol Building, and that was the unarmed woman shot by a Capitol Hill officer. They also cast blame on Trump, writing that many rioters "have said they took Trump's own words as the inspiration…" Maybe they felt that way, but we know they didn't even hear his rally speech and that Trump had not called for anything like what they did.

The Justice Department has been exaggerating, too. In fact, by video conference last week, District Court Judge Amit Mehta lit into the DOJ for granting media interviews and throwing around terms like "seditious conspiracy" -- a very grave charge -- when they haven't actually charged anyone with this. What this judge has to say about defendants' rights is music to the ears. The judge is considering a gag order, which is a great idea because trying cases in the media should make us all, well, gag.

Be sure to read the story, which is by these same Politico writers; it could be a highlight of your day.

The post Crimes and Misdemeanors: Many January 6 ‘Rioters’ Broke Small Laws appeared first on The Stream.