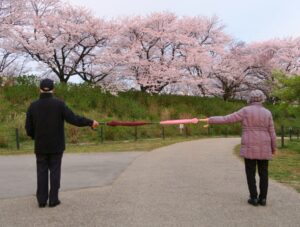 The Centers for Disease Control and Prevention (CDC) has stopped short of changing social distancing guidelines despite economic ramifications and contrary evidence. "For adults, the evidence continues to show that a distance of at least 6 feet is necessary to lower transmission risk," CDC spokesperson Jasmine Reed told the Daily Caller News Foundation. The 6-feet social distancing guidance might have been the "single costliest measure" recommended by the CDC, Dr. Scott Gottlieb wrote in a recent Wall Street Journal editorial.

The Centers for Disease Control and Prevention has stopped short of changing social distancing guidelines despite economic ramifications and contrary evidence.

The Centers for Disease Control and Prevention (CDC) altered its in-person classroom guidelines last week, saying students could be spaced 3 feet apart instead of the previous distancing mandate of 6 feet. The health agency didn't change its overall guidance affecting the general public, though, despite evidence that the 6-feet social distancing rule is unnecessary and economically harmful.

"Studies in the school environment show that when kids are masked a distance of at least 3 feet is sufficient to lower transmission risk," CDC spokesperson Jasmine Reed told the Daily Caller News Foundation in a statement.

"For adults, the evidence continues to show that a distance of at least 6 feet is necessary to lower transmission risk," she continued.

Multiple studies examining the effectiveness of social distancing, however, have shown that the likelihood of transmitting a virus begins decreasing once individuals are separated by 1 meter, or just over 3 feet. The CDC essentially adopted a 6-feet mandate as an extra precaution, according to a May 2020 Government Accountability Office (GAO) report.

"While it is clear that maintaining separation between individuals provides important protection, there is no definitive statement in the literature regarding effectiveness of specific distances," the GAO report said.

The report noted that, historically, the CDC has recommended 1 meter of separation to avoid contracting viruses, but decided to change course during the coronavirus pandemic to "further reduce risk." The vast majority of researchers agree that social distancing guidance is necessary, but many admit that specific measurements beyond one meter are arbitrary.

"Rigid safe distancing rules are an oversimplification based on outdated science and experiences of past viruses," several experts, led by University of Oxford clinical researcher Nicholas Jones, concluded in a study published in The BMJ medical journal in August.

Jones and the other researchers found that mandating a single fixed distance, an idea that dates back to studies conducted in the late-1800s and mid-1900s, across all society is unnecessary. Rather, factors such as ventilation, airflow and type of activity should be factored in.

Another study, published in The Lancet in June, concluded that transmission of viruses was lower with physical distancing of 1 meter or more.

Such research has led the World Health Organization (WHO) and other leading global health agencies to recommend social distancing of 1 meter instead of the 6 feet, or 1.8 meters, recommended by the CDC.

"Maintain at least a 1-meter distance between yourself and others to reduce your risk of infection when they cough, sneeze or speak," the current WHO guidance states.

Canada and the U.K. are among the only nations whose social distance guidance calls for greater distance -- 2 meters of separation -- between individuals than U.S. guidance calls for, according to BBC News. The U.K. had previously ditched the 2-meter guidance over the summer before returning to it, The Guardian reported.

"More distance is always better when it comes to contagion," former Food and Drug Administration Commissioner Dr. Scott Gottlieb wrote in a recent Wall Street Journal editorial. "But the 6-foot directive might have been the single costliest measure CDC has recommended, which have been largely followed over the past year."

Social distancing of 6 feet or more could ultimately complicate, or even delay, a much-needed economic recovery in the U.S., Gottlieb argued. The economy shrank 3.5% in 2020, according to a Jan. 28 Bureau of Economic Analysis report, the worst performance since the 1940s.

Small businesses, which often rely on in-person customer purchases and heavy foot traffic, have seen revenues decline 27.5% since the start of the pandemic, according to Harvard University's Economic Tracker.

Gottlieb added that it isn't clear where the six-feet directive derived from since the CDC has failed to reference specific studies that support that figure. He recommended that President Joe Biden's administration revisits guidelines and loosens restrictions.

"[CDC] doesn't always identify the underlying science of its recommendations," he said in the WSJ editorial. "We don't know the exact basis for its initial view to stay 6 feet apart."

The post Here’s Why the CDC Altered Distancing Rules for Schools But Not Everyone Else appeared first on The Stream.