Is America Heading to a Tragic End? I Say No 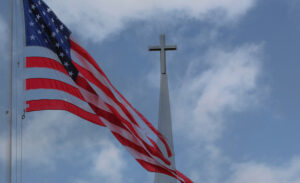 Democrats have passed another COVID relief bill. This legislation is both unethical and dishonest, even though the Pew Research Center says 70% of Americans support it.

First, the $1.9 trillion expense will add a tremendous strain to an already enormous national debt. Second, though it's called the COVID relief bill, only 9% will go to COVID relief efforts. Ninety-one percent will be spent on advancing items on the Democrats' political agenda. Americans should be outraged, but a majority supports it. This comes as a surprise, yet it reveals far more than just imprudent judgment. These famous words, often attributed wrongly to 18th and 19th century authors, remain true just the same:

A democracy will continue to exist up until the time that voters discover that they can vote themselves largesse from the public treasury. From that moment on, the majority always votes for the candidates who promise the most benefits from the public treasury, with the result that every democracy will finally collapse due to loose fiscal policy, which is always followed by a dictatorship.

My mind tells me this is the likely path we are taking. But my heart says no, refusing to accept this prospect. It may not be that hopeless after all. As a person who has lived in two systems, Communist China and the United States, my frame of reference offers a more optimistic perspective.

From the bottom of my heart, I know America is like no other place. Her beginning, her tradition, her culture and her political system are exceptional. If her beginning is one of a kind, I believe her ending will also be, not repeating history but setting a new precedent.

Let us remember the character of our God, who alone can solve all the problems we are facing.

After immigrating to America, I felt my value and my worth noticeably increased. America respects human dignity and rights, because Judeo-Christian values have heavily influenced American culture. Humans have rights and dignity because we are not merely a random after-effect of evolution. We're not slaves at the mercy of the gods, either. We are created in God's image and loved by our Creator.

Without this knowledge, we have no reason to see ourselves as any different from animals. There is no logical ground to suppose that it's wrong when others mistreat us; for evolution knows nothing of right or wrong, only survival. Human cruelty and brutality have always been widespread in many corners. They're only felt as so intolerable in places like America.

Sensitivity in the Cultural Context

I still remember an incident that took place in China while I was living with American exchange students. We were walking through the campus and saw a disabled man struggling in front of us. My American roommate leaned over and whispered in my ear in Chinese, "Don't look at him. It makes him feel bad."

Her words really shook my conscience. I had never thought why I should be concerned about this disabled man. Everyone stared at him. The idea that a disabled person deserved the same respect as an able-bodied person had never crossed my mind. Didn't my teacher teach us Darwin's theory of evolution, survival of the fittest? I'm not an insensitive person. But a person's sensitivity only functions within a cultural context.

“There is God in America!”

When my niece returned to America from her homeland, she uttered the sentiment, "There is God in America!" Here, she felt she was valued and respected as a person. Indeed, the sense of human dignity and worth can be a very touching experience to anyone from another country.

Yes, the American experience is not without its evils. Too often we violate God's principles. But I want to drive home this point, that, in most places in the world, and in most cultural frameworks, the concepts of human rights and dignity are totally absent. People in those places are far more tolerant of cruelty and brutality, and less sensitive to human suffering. Because of the Judeo-Christian influence here, though, America retains a sense of absolute truth and the conviction that evils should not be tolerated.

I know there always remains a gap between cultural standards and actual practices. Nevertheless, the American conscience differs significantly from many other traditions. It is this conscience that compels Americans to acknowledge their history and make it right. That alone is remarkable!

I believe God established America as a nation to demonstrate that He desires us to live freely with dignity. As the freest country in human history, America symbolizes and foreshadows the ultimate freedom and dignity that can only be found in Christ.

I have heard countless times that it is much easier for an atheist Chinese to become a Christian in America than in many other places. God put the longing for dignity and freedom in our hearts, and that longing is awakened and takes on a spiritual dimension when immigrants come here. It's because America provides a concrete earthly manifestation of that spiritual reality.

I can testify from my own experience that American freedom and human dignity function as an invisible bridge leading many immigrants to Christ. Indeed, like my niece said, "There is God in America!" This is what makes America so special!

Remember the Character of America

Yes, we are facing unprecedented challenges: cancel culture, globalism, big tech censorship, Marxist ideology, violation of God's created order. Many of these confrontations are unique to America. Our culture traditionally has a low tolerance for evil. Unfortunately, Satan has taken advantage of this great tradition and twisted truth to create new forms of evil in the name of social justice, deceiving many. All the absurdity in violating God's created order belongs to this category.

Our hearts grieve over the prevailing force of evil. We wonder if the landscape of American culture has forever changed from low tolerance for evil to high acceptance for wickedness. In times like this, let us remember the character of America. She is a hardy plant that is capable of enduring harsh conditions. The foundation of biblical truth still resides in the hearts of many who are not afraid to fight. Like our founders, who sacrificed tremendously for the formation of this nation, we, too, are ready to give every ounce of ourselves to defeat the Enemy of God.

And Remember the Character of God

More crucially, let us remember the character of our God, who alone can solve all the problems we are facing. But He chooses to use us as His instrument to carry out His purpose. God does not need a majority vote from His followers. He does not need an imposing army. He only needs a fully devoted remnant who will give Him five fish and two loaves of bread from which He will again feed 5,000! We are His remnant!

Let us believe that God has a special purpose for America and has shed His grace on her. Let us be encouraged and motivated to continue acting like true Americans who fear God and cannot tolerate evil. And let us prove that America will defy the dire predictions, because God can even use a disaster like the COVID relief bill and turn it redemptively. Indeed, He who began a good work in America will not let her end tragically!

Chenyuan Snider was raised in Communist China and majored in Chinese language and literature in college. After immigrating to the U.S. and having studied at Assemblies of God Theological Seminary and Duke Divinity School, she became a professor and taught at Christian colleges and seminary. After March, 2020, she sensed God was leading her to use her unique voice to provide a warning about various kinds of Marxist influences in our society. She lives in northern California with her husband and has two grown children.

The post Is America Heading to a Tragic End? I Say No appeared first on The Stream.