This Week at War: Pounding ISIS 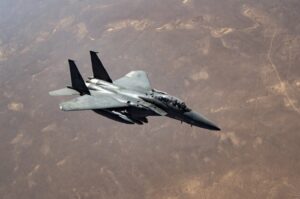 American fighter jets are pounding ISIS in Iraq as the war against the terrorist group continues.

More than 150 airstrikes have been carried out near Mosul in the past month alone, according to a new report by Stars and Stripes. The strikes have been successful in “destroying scores of enemy positions and killing dozens of terrorists.” Chad Garland also reports that there have been more U.S. airstrikes in Iraq this month than all of last year.

A recent Pentagon report said there are an estimated 8,000 to 16,000 ISIS terrorists still active in Iraq and neighboring Syria, where U.S. military patrols continued this week.

U.S. Forces conduct routine patrols and supply convoys in NE Syria. These patrols are part of our continuing mission to defeat Daesh. Unless pressure is maintained, a reemergence of Daesh remains a very real possibility. pic.twitter.com/S9CTLfVSEA

American and Iraqi diplomats are currently meeting to discuss the ongoing role of the U.S. military in Iraq, where troops have been stationed for the past 18 years. The stated goal of the current missions in both Iraq and Syria is to stop ISIS from re-forming.

There are an estimated 2,500 American service members at war in Iraq and an unknown number in Syria. Please keep these warriors and military families in your prayers.

Similar negotiations are taking place in Afghanistan, where U.S. troops have been at war every day since October of 2001.

The Los Angeles Times reports that “American and Taliban negotiators are discussing a pause in U.S. airstrikes and drone flights in Afghanistan in order to revive longshot peace talks.” The Biden administration is reportedly demanding that any deal be accompanied by the Taliban “sharply” reducing violence, which never occurred after a previous peace deal was struck.

“A halt to U.S. air operations worries the Afghan government and its military, which still relies heavily on U.S. airstrikes and aerial surveillance video from drones to help hold back the Taliban,” the L.A. Times report notes.

There are currently about 3,500 brave U.S. troops at war in Afghanistan. Please pray for these heroes and their families here at home.

There was a strange and troubling story this week in west Texas, where a convoy of National Guard troops was held up by an armed man who is now in police custody.

According to the Fort Worth Star-Telegram, eleven National Guard soldiers were transporting shipments of the COVID-19 vaccine in three vans when a man “turned his truck in front of the convoy, forcing it to stop.” He then allegedly drew and aimed his pistol at the troops, who were unarmed at the time.

Police arrived after the man allegedly impersonated a police officer and proceeded to search the troops at gunpoint.

“We are grateful that the officers were able to take him into custody without any of the Guardsmen, the officers or the suspect getting hurt,” Idalou, Texas police Chief Eric Williams said in a statement published by the newspaper.

Thank you, Lord, for protecting these soldiers as they carried out the important work of delivering the coronavirus vaccine to those in need.

The fast-attack submarine USS Hawaii is back at Pearl Harbor after spending the past seven months at sea. 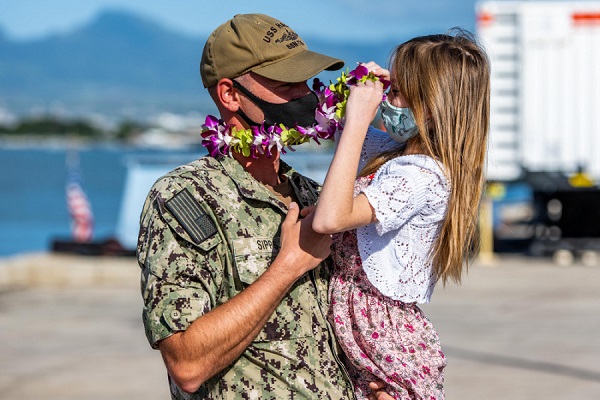 A U.S. Navy sailor serving aboard the fast-attack submarine USS Hawaii holds his daughter during the submarine’s homecoming on March 19, 2021, at Pearl Harbor in Hawaii.

Welcome home, heroes! Thank you for defending our freedom overseas.

The post This Week at War: Pounding ISIS appeared first on The Stream.