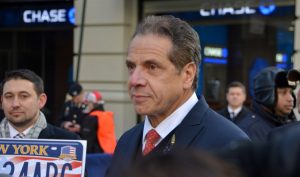 Over 9,000 recovering virus patients flooded into New York nursing homes because of the order, which prohibited facilities from denying admission to any patient based on a confirmed or suspected diagnosis of the virus. At least 4,000 nursing home residents died when the order was active between March 25 and May 10, New York Attorney General Letitia James reported in January. Some of those deaths occurred in 323 nursing home facilities that had no reported COVID-19 infections before the order was issued, James said.

The order, and Cuomo's subsequent undercounting of nursing home deaths beginning in early May, are now at the center of an investigation by federal prosecutors and an impeachment inquiry by the New York state assembly.

Cuomo's March 25 order was immediately criticized by the Society for Post-Acute and Long-Term Care Medicine as "over-reaching, not consistent with science, unenforceable, and above all, not in the least consistent with patient safety."

The Daily Caller News Foundation reported on May 15 that the Cuomo administration began knowingly undercounting nursing home deaths around May 3, around the same time critics began questioning whether the governor's order was leading to the state's nationwide-leading nursing home death toll.

But it took over half a year for Cuomo's handling of the COVID-19 outbreak in New York nursing homes to catch up with him. It wasn't until January, when James reported that the Cuomo administration was undercounting nursing home deaths by 50%, when the media at large and Democratic politicians began seriously scrutinizing the governor's handling of the situation.

Cuomo was hailed as a hero for much of 2020. Media columnists gleefully declared they were in love with the governor. Daily Show host Trevor Noah came out as a "Cuomosexual." Cuomo appeared at least 10 times on Chris Cuomo's CNN show, soaking in adulation from his brother calling him the "Love Gov" and asking about his love life.

Cuomo prematurely declared victory over COVID-19 on June 19, proclaiming that "love does conquer all." The next month designed and sold a poster commemorating New York's victory over the virus.

"Wake Up America! Forget the Politics, Get Smart!," Cuomo quoted himself saying in his poster.

Cuomo announced in August he will publish a book touting the leadership lessons he learned during the pandemic. He reportedly earned a seven-figure advance from his publisher, according to Vanity Fair.

And in November, the International Emmy Awards announced Cuomo would receive the 2020 International Emmy Founders Award "in recognition of his leadership during the COVID-19 pandemic and his masterful use of television to inform and calm people around the world."

At least 15,557 residents of New York nursing homes, assisted living facilities and other adult care facilities have died from COVID-19 as of March 23, according to the state's latest available reporting.

It wasn't for a lack of trying that critics of Cuomo's handling of nursing homes flew under the radar for much of 2020.

Fox News meteorologist Janice Dean was one of the earliest and most vocal critics of Cuomo throughout 2020. Bother her mother-in-law and father-in-law died of COVID in nursing homes in the weeks after Cuomo's March 25 order went into effect. Dean said in February Cuomo's order was tantamount to a "death warrant" for her in-laws.

"Many ask if I feel satisfaction that 10 months later, Governor Cuomo and his administration are under several investigations into the nursing homes and the cover-up of numbers," Dean told the DCNF. "I'm not sure if I'll ever feel anything about this past year. We'll never get our loved ones back, and we were never able to properly mourn them."

Dean said she hopes the ongoing investigations into Cuomo will probe the origins of the March 25 order, why he "lied and covered up the death toll," and why New York did not take full advantage of the USNS Comfort, the Javits Center and other makeshift hospitals provided by former President Donald Trump's administration during the early stages of the pandemic.

"What I do know is a March 25th order should never be allowed again," Dean said. "Going forward, we should do everything possible to protect our most vulnerable. I also believe every victim should be able to tell their story, but tragically, 15,000 of them are no longer with us. Because of that, I will continue to try to be a voice for them for as long as it takes."

"Our governor doesn't care, but I do," Dean added.

The post It Has Been One Year Since Cuomo Ordered Nursing Homes to Accept COVID Patients appeared first on The Stream.