Why So Much Murder and Mayhem? 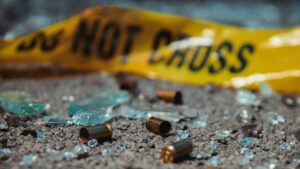 The recent shooting at a supermarket in Colorado forces us to ask again, "Why is America such a violent society? Why so much murder and mayhem?"

We should remember the old saying, "The amount of love in a person's life is rooted in the love they were shown as a child." While a person with a good and loving childhood may still turn into a mass murderer, it does not negate the fact that we learn about love and respect for human life from the love and respect we receive (or don't receive) in our formative years.

Our Early Experience Influence Us

This love and acceptance is not limited to our experience as little children. Years ago I was told about a friend who found a novel way to get her fretful infant off to sleep. When the mother was pregnant she would flop down after a busy day with a cup of coffee and a cookie to watch her favorite soap opera. This particular TV show began with catchy theme music. Quite by accident, once baby was born the mother discovered that if she played the theme music, baby would go to sleep instantly.

The long term answer is for the strengthening of the traditional family unit -- not just mothers and fathers and two neat children -- but large extended families and local communities where all are welcomed, supported and valued.

She drew the conclusion that her baby had heard the music in the womb and associated it with mother's sense of well being and relaxation while watching the show. So my friend kept a recording of the music handy. When baby was not dropping off to sleep, Mom would switch on the theme music, and baby drifted off to slumberland.

What's the point? That the influences in our early years -- even in the months before birth -- matter. If a child is conceived in a moment of drunken violence rather than self-giving love, the first moment of their life is one of violence. If they are carried for nine months in an atmosphere of anxiety, fear and violence, those emotions become part of their emotional and personality foundation.

Why is there so much murder and mayhem in our nation? Why is the rate of urban violence, drug addiction and suicide skyrocketing? The deeper reasons are rooted in the breakdown of the family, irresponsible and immature relationships, and the willful disregard for moral norms that have been known and respected in civilized cultures for centuries.

In other words, immorality leads to murder and mayhem. At its heart, all immorality involves the lack of respect and love for others on which a peaceful and prosperous society depends. If we have no real respect for women, for mothers and their children, why are we surprised when there is violence in the streets, human trafficking, abuse of the poor and vulnerable and the other horrors we read about in the news?

The long term answer is for the strengthening of the traditional family unit -- not just mothers and fathers and two neat children -- but large extended families and local communities where all are welcomed, supported and valued. These communities can be built in our homes, our churches, schools and local neighborhoods, but it requires leadership, intention and commitment from all.

Dwight Longenecker is a Catholic priest working in South Carolina. His new book is Immortal Combat: Confronting the Heart of Darkness.

The post Why So Much Murder and Mayhem? appeared first on The Stream.