When Don Lemon Lectures the Church About Homosexuality 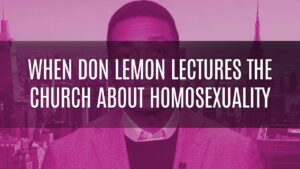 After the Vatican reaffirmed that the Catholic Church cannot bless same-sex unions, CNN’s Don Lemon, himself proudly gay, said a position like this is “wrong” because it “hurts another person” and “does not give another person the same rights and freedoms.”

“I think that the Catholic church and other churches really need to reexamine themselves and their teachings because that is not what God is about. God is not about hindering people or even judging people,” Lemon said. He then invoked Martin Luther King Jr. to accuse the Church of immoral discrimination in the past, in this case regarding racial segregation.

Dr. Brown responds, starting with this recommendation: “Here’s what I encourage you to do, sir. Really get to know God. Really get to know the God of the Bible. Really get to know what Jesus is about, even if it means radical change in your own life.” Dr. Brown also challenges the idea that God does not desire to “hinder” certain behaviors in people, that Lemon can assume he knows the mind of God and knows what is best, and that a person’s skin color is morally comparable to a person’s sexual behavior.

The post When Don Lemon Lectures the Church About Homosexuality appeared first on The Stream.