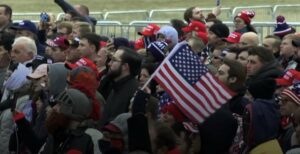 “The saddest part of this is I can't serve my country any more."

That was former DEA Special Agent Mark Ibrahim, speaking on Tucker Carlson's Tuesday night show about being suspended and then fired from his job after merely attending President Trump's January 6 rally in Washington, DC.

He never participated in anything illegal and is not alleged to have done so, and he spoke out in support of law enforcement when things started to get out of hand near the Capitol, but that apparently made no difference to his superiors.

They said his firing was over "performance issues."

He Was There as a Spectator

Ibrahim was one of the "garden-variety Republicans" (Tucker's words) who attended the pro-Trump rally. He never entered the Capitol, he said, or even set foot on the steps outside. He stayed back and documented some of the action on his phone when a part of the crowd turned unruly, saying on-camera, "It's crazy how quickly they turn on the cops. It's not right. Everyone's just tryin' to do their job, man."

Ibrahim hadn't even been planning to go to the event, but was asked by a friend with whom he'd served in Iraq if he would "help him get there for documentation purposes." He decided to stay, and the two of them were there as spectators. He turned the video he'd taken of the ruckus over to the FBI "so those criminals would face justice." He said,

I tried -- I wanted -- to aid law enforcement that day as best I could, and seeing that the WFO [Washington Field Office] SWAT team was there and better suited to handle the situation than me…I decided documenting would be the way to go. I really didn't think anything of it…And now I'm actually the subject of a criminal investigation.

Suspended and Then Fired

Later, when he returned to his home office in Los Angeles, he had his badge and gun taken away and was escorted off the premises to his apartment, "like a criminal," he said. After a two-month suspension, he was fired.

“The saddest part of this is I can't serve my country any more."

Tucker, after calling this part of an "ideological purge" that is out of control within the federal government, asked Ibrahim if the action they took against him was even legal. "Don't we have civil service laws that protect career federal employees from being fired for their political beliefs? I thought we did."

“I…hope we do, too," Ibrahim said, seemingly at a loss for how to respond.

He said his brother, an FBI special agent, was there as well. At least so far, "no adverse action" has been taken against the brother.

They Got It Wrong

“They got it wrong,” Ibrahim said.

Me and my brother both served in the Army. I followed him into federal law enforcement. My sister is a Navy veteran. My mom was in the Pentagon on 9/11. And I'm the son of two immigrants who left oppressive regimes…My mom instilled a debt that we owe this country for the liberties and freedoms, that they're not free.

So, how much freedom do we have, really? And how is Ibrahim responding? Can he get his job back?

He's decided to take legal action against the DEA. He said his friends set up a "GiveSendGo" account to help him raise money for legal fees and living expenses. (We looked for this under his name late Tuesday and didn't find it; perhaps they've met their goal.)

“Better men have suffered worse for the preservation of our Union," he said. "I just didn't see it coming from my own country, let alone my own agency."

He explained that since he'd been taking orders since he was 18, he'd thought he would just accept this, but that his friends encouraged him to fight -- not just on his own behalf, but for everyone who's been wrongfully persecuted for their political views. He encourages others who have faced similar persecution to do the same.

“I pray that our country heals," he said. "I pray that we stop marginalizing and dehumanizing one another."

As should we all. At the same time, it's good that he's not sitting back and taking it -- good for him, and good for the country. There have been far too many "cancelations" over political beliefs, and when we see it happening within the government, it's particularly chilling. I'm always reminded of what then-First Lady Hillary Rodham Clinton was quoted as saying about firing the (nonpartisan) White House Travel Office Staff: "We need those people out, and we need our people in."

The Capitol Hill breach gave Democrats convenient cover to falsely label Trump supporters "domestic terrorists," confront them with razor wire, and purge them from their midst. For example, the U.S. Army official appointed by House Speaker Nancy Pelosi to lead the investigation of "the security infrastructure, interagency processes and command and control" on Capitol Hill during the riot, retired Lt. Gen. Russel Honore, criticized the Capitol Hill police for being 30-40 percent "Trumpsters" and assumed those officers had let "their buddies" into the Capitol Building. Here's a refresher.

We've seen enough examples of this attitude to conclude that it permeates the military and the federal bureaucracy under Biden, with plentiful Obama holdovers now augmented by former Obama staffers, in a happy homecoming.

And now, they essentially fire a career employee for supporting President Trump.

It Should Be Illegal

Title VII of the Civil Rights Act of 1964 makes it illegal to discriminate against anyone on the basis of race, color, religion, national origin, or sex. Don't expect the Democrats, while they hold Congress and the Senate, to add "political beliefs" to this list, because they won't, but it needs to happen. It should be illegal to punish or fire someone for attending a political rally, or supporting a particular candidate (as long as they're not electioneering at work), or tweeting something about a candidate or issue. "Cancel culture" has shown us that in today's society, every American needs this protection.

Likewise, there are hate crime laws at both federal and state levels that criminalize acts motivated by bias against the victim's identity within particular groups. (I should note that Arkansas is one of three states that don’t have their own separate hate crime laws.) These groups typically include race, religion, national origin, sexual orientation, gender identity and disability. We saw too many law-abiding people get beaten to within an inch of their lives during last year’s “summer of love” for daring to wear a MAGA hat. Victims were even blamed for wearing clothing that "triggered" violent responses.

Of course, the violent assault of anyone should be aggressively prosecuted, whether or not the victim belongs to a particular group. The charge: "aggravated assault." But as long as we're keeping lists of victimized groups, and it seems we need to, "political belief" remains a glaring omission. We wish Mr. Ibrahim well in his lawsuit.