Huckabee on the ‘Pro-Life Evangelicals for Biden’ Feeling Betrayed 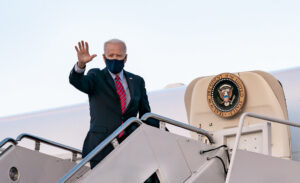 For those of us for whom the sanctity of life issue is an absolute and non-negotiable, it's stunning if not comical to see a group calling itself "Pro-Life Evangelicals for Biden" act shocked that now President Biden is proudly the most radical pro-abortion President in history and more than any other leader in any other country.

The fact that these Never Trump Evangelicals seem surprised either attests to their extraordinary political naivete or their utter cluelessness as to everything Joe Biden promised to do not just to advance a radical abortion policy, but to do something not even President Obama pushed for -- to force taxpayers to fund abortions up until the moment of birth.

The rationale given for these so-called pro-life believers to support Joe Biden was because they didn't approve of Donald Trump's tone or his tweets. Most of us in the mainstream of evangelical life never defended tweets that were harmful or attacks on individuals. But we recognized that President Trump turned out to be by far the most pro-life President in American history. No one else has been even close.

And all that he did to faithfully and forcefully support life was reversed by Joe Biden on his very first day in office.

So how's that support for Biden working out for you? You gave him your support and helped elect him. He's not even given you a courtesy meeting. He just stuck it to you and didn't even send you a "thank you" card.

Now the pro-life evangelicals for Biden say they feel "used and betrayed." They said they were promised that if they helped elect Biden there would be dialogue on this and other issues. Now they admit they can't get a meeting with even low-level staffers and watch helplessly as the Biden administration pushes for the most disgusting measures of abortion.

Joe Biden had at least historically favored the Hyde Amendment, which prohibited use of taxpayer funds for abortion. But from the early days of the campaign, Biden reversed his position and openly said he'd repeal the Hyde Amendment. He promised to give Planned Parenthood full funding, and said he'd reverse the Mexico City Policy which prohibited your tax dollars from paying for abortions in other countries.

So how's that support for Biden working out for you? You gave him your support and helped elect him. He's not even given you a courtesy meeting. He just stuck it to you and didn't even send you a "thank you" card.

You got used alright, but you weren't betrayed. Joe Biden was crystal clear in saying he was going to open wide the doors for all the abortions Planned Parenthood and the leftists are demanding. As the big fat "porkulus" bill passed in the House, the evangelicals for Biden pretend they feel betrayed and "demand" for him to take out the abortion funding in the bill.

Remember, this $1.9 trillion dollar bill is supposed to be about COVID relief, but only about 9% has a thing to do with COVID. It's a lard-loaded spending bill to dole out billions to Democrat led cities and states that poorly managed their budgets. It's so ridiculous that it gives $1400 checks to death row inmates and pedophiles.

Those of us who supported President Trump never were dishonest about the fact that he was not "one of us" and his personality was often lacking in kindness or gentleness to those who attacked him or disagreed with him. But we appreciated that when it came to sanctity of life, religious liberty or support for Israel, he kept his promises and acted on them.

If my brothers and sisters who helped elect Joe Biden feel betrayed and used, maybe they should repent for what they have done to unborn children and use their voices to denounce the deceptions they experienced. And next time, don't be so lacking in self-awareness. Joe Biden didn't keep any of his promises to you, but he sure kept his promises to the radical left because that's what he said he would do.

Let's all use our voices to loudly condemn the use of our tax dollars to kill babies. Surely that is an issue that can unite evangelicals, Catholics, and even feminists.

The post Huckabee on the ‘Pro-Life Evangelicals for Biden’ Feeling Betrayed appeared first on The Stream.