What if Government Knows You Ate a Big Mac — And Doesn’t Approve? 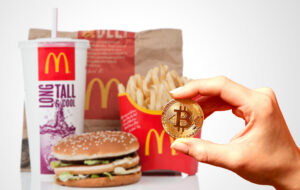 That title question is not a crazy notion. It's already happening in mostly cashless China. The Constitution and the law may not be the barrier that many suppose in America if your personal choices make it possible. We need to talk about the unpublicized implications of a cashless society.

Bernard Fickser, whose work Mind Matters News profiled recently, thinks that surveillance creep is one of the factors driving the growing interest in cryptocurrencies like Bitcoin and Ethereum.

Earlier we talked about the increasing popularity of Modern Monetary Theory (MMT) -- government should just print money to satisfy social demands and then raise taxes to pay for the choices made. A triumph of MMT would intensify the competition between government-issued currencies and cryptocurrencies like Bitcoin and Ethereum. But, as Fickser points out, the trend to a cashless society might also become a deciding factor for many. What if digital serial numbers follow all currency and all financial transactions? That is, or soon will be, technically feasible but how might it affect ordinary citizens?:

Ask yourself where this tracking would end. In a cashless society, where every item of money has been issued as a central bank digital currency and can be tracked, certainly the privacy of those transactions comes to an end. But tracking is only the first step in a surveillance economy. Once one has started down this slippery slope, what is to prevent the trackers of my (and your) financial transactions from trying to shape my behavior? What if I'm getting ready to pay for a Big Mac and I see a pop-up on my phone indicating that the purchase I'm contemplating is not the best thing for my health and that I should not make it. Such paternalistic intrusions are in line with proposals by Cass Sunstein and Richard Thayler in Nudge. [12]

But where do these paternalistic intrusions end? Suppose I decide, despite the urging on my phone, nonetheless to buy and eat the Big Mac. What if next time, my bank, which holds my digitally tracked money, or my credit card, which depends on payment in digitally tracked money, refuses to let me buy a Big Mac? Or what if, instead, the government clamps down on McDonald's and keeps it from receiving central bank digital currency from people like me whom it deems as risking their health by consuming a Big Mac?

In such cases, it might be argued that the government is still trying to act in the best interests of the people whose money it is tracking and now increasingly controlling. But what if the government decides to shift from a paternalistic to a more punitive role? Are you late with an alimony payment? Sorry, but you can't take that business flight -- we're going to block payment until you're caught up with your debt...

Two things worth noting here: Chances are, any such scheme will be enthusiastically marketed to the public as a move needed to protect the environment, ease global warming, improve online security, and promote public health and social justice. It won't be marketed as the government knowing more about you than your nearest and dearest and being in a position to hang you up.

Second, it's not science fiction or dystopia. Such a "social credit" system is under development in China, intended for full rollout. One basis is, of course, zealous tracking of expenditures.

A source that counsels businesses aiming to enter China explains that a low social credit score can result in travel bans, school bans, job prohibitions, increased scrutiny, government inspections, decreased internet speeds, and public shaming. "The government keeps a public list of individuals and businesses with a poor score. This can make it difficult for businesses with low scores to build relationships with local partners who can be negatively impacted by their partnership." - New Horizons Global Partners, 2021.

This short video gives some sense of how intrusive the system is with respect to spending habits:

The Curse of Cash?

Cash transactions in North America today cannot, of course, be tracked. But some economists call for the elimination of such transactions. Harvard economist Kenneth Rogoff, for example, has written The Curse of Cash (Princeton University Press, 2016), according to which most cash "is used to finance tax evasion, corruption, terrorism, the drug trade, human trafficking, and the rest of a massive global underground economy." Fickser responds,

Given a growing sentiment among economists for government to eliminate cash, as outlined in the last section, cryptocurrencies may be the next best thing to cash, and some would argue even better. Like cash, cryptocurrencies promise to stay out of the reach of meddling monetary authorities. It's therefore no surprise that some of the biggest advocates of cryptocurrencies are also deeply skeptical of government control of money. Cryptocurrencies thus have a lasting appeal, at least to people with an anti-Big Brother streak, and this fact is likely to keep these currencies alive and holding value for some time. How much value is another matter.

As Fickser goes on to say, whether cryptocurrencies will succeed in the long run is yet to be seen. But we can say in their defense that their proponents address real concerns. Less than a decade ago, New York mayor Mike Bloomberg tried banning large size sodas in his jurisdiction.

His effort to improve residents' health by limiting what they could buy failed. But he didn't have total surveillance on his side at the time, nor the political climate that would see surveillance as a road to prescribed virtue. With ramped up technology, his ideas might gain new popularity among social planners.

Maybe the only way some customers could get their soda of choice with no political consequences would be via -- cryptocurrency. Something to keep an eye on.

Note: Our earlier discussion of Bernard Fickser's views: Central banks vs. cryptocurrencies: Why the growing tension? Modern Monetary Theory (MMT), which is gaining ground, holds that government should just print as much money as it feels it needs and then raise taxes to cover shortfalls. The growing popularity of Modern Monetary Theory (MMT), which does not control for inflation, is spurring interest in cryptocurrencies.

The post What if Government Knows You Ate a Big Mac — And Doesn’t Approve? appeared first on The Stream.