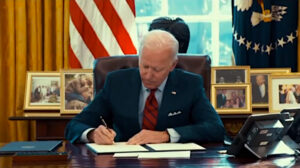 Within his first two weeks in office, President Biden has signed an unprecedented number of executive orders -- 47.

Writing for Quartz, Amanda Shendruk notes, "Joe Biden has been US president for less than two weeks and has already issued nearly as many executive action as Trump and Obama did in the same period, combined." [Emphasis hers]

"Memorandum on Protecting Women's Health at Home and Abroad." The Mexico City Policy. Translation: abortions in other countries, paid for by you and me. "Executive Order on Preventing and Combating Discrimination on the Basis of Gender Identity or Sexual Orientation." Boys identifying as girls can use the women's restroom and locker-room. And bye-bye, women's sports. "Proclamation on Ending Discriminatory Bans on Entry to the United States." Translation: We will not discriminate against would-be immigrants, including violent jihadists. "Paris Climate Agreement" and "Executive Order on Protecting Public Health and the Environment and Restoring Science to Tackle the Climate Crisis." With the stroke of his pen, he has already cost thousands of U.S. jobs in a move based on questionable scientific premises.

And on it goes with a radical agenda.

Even the editorial board of The New York Times published an op-ed: "Ease Up on the Executive Actions, Joe." They said, "legislating through Congress is a better path."

Who said these things? Then-candidate Joe Biden in a town hall with George Stephanopoulis on October 15, 2020.

Into the third week of the Biden presidency, it appears to be the third term of President Obama. The 44th president once famously declared: "I've got a pen and I've got a phone, and I can use that pen to sign executive orders and take executive actions and administrative actions that move the ball forward."

In other words, if the people's representatives (in the House and Senate) don't act quickly enough or do what I want them to do, then I'll issue executive orders to get my will done. Biden is continuing this tradition -- and then some. He has slim majorities in both the House and Senate, but he is bypassing even them.

'All men having power ought to be distrusted.'

One doctrine the founding fathers of America seemed to agree upon is revealed in the Bible and proven by all history -- that man is a sinner. Therefore, power was to be separated into three distinct branches of government. As James Madison, a key architect of the Constitution, once put it, "All men having power ought to be distrusted."

Madison also observed (in Federalist #47): "The accumulation of all powers, legislative, executive, and judiciary, in the same hands, whether of one, a few, or many, and whether hereditary, self-appointed, or elective, may justly be pronounced the very definition of tyranny."

What Biden, and Obama before him, have engaged in could be called "executive overreach."

Tim Goeglein, the D. C. representative of Focus on the Family, once said of such overreach: "This is unconstitutional, and it's not what our founders wanted."

All presidents have the right to sign executive orders. And virtually all of them have used that right. But critics note that this is excessive -- and not a healthy example of representative government.

Randy Barnett, a professor at Georgetown Law and the author of Our Republican Constitution, once told me, "All three branches of government are supposed to be our servants, not our masters."

But I asked him, "Haven't times changed and thus circumstances changed?"

He answered, "Well, human nature has not changed. Human nature is, the idea that people basically pursue their self-interests -- even if that interest is adverse to the rights of fellow people, other follow citizens, or adverse to the public interest. And you needed a republican Constitution to constrain the exercise of government and power."

Biden’s Excessive Use of the Pen

All presidents have the right to sign executive orders. And virtually all of them have used that right. But critics note that this is excessive -- and not a healthy example of representative government. In effect, it is an end-run around "we the people."

Goeglein, who worked for the Bush 43 administration, said of the founders, "They designed a system that pushed power downward and outward because they feared centralization of power, and they feared the consolidation of power."

Hopefully, Biden's pen will run out of ink sometime soon.

Jerry Newcombe, D.Min., is a senior producer and an on-air host for D. James Kennedy Ministries. He has written or co-written 32 books, such as The Unstoppable Jesus Christ, American Amnesia: Is American Paying the Price for Forgetting God?, What If Jesus Had Never Been Born? (with D. James Kennedy) and the bestseller, George Washington’s Sacred Fire (with Peter Lillback). Learn more at www.jerrynewcombe.com and follow him on Twitter @newcombejerry.