Impeachment2021: Dems Claim Trump Pointed ‘Loaded Cannon’ at US Capitol. But Are They Shooting Themselves in the Foot? 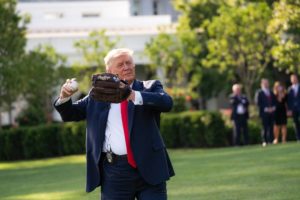 President Donald Trump pointed a "loaded cannon" at the U.S. Capitol on January 6, and is "singularly responsible" for the riot that day. Or so claim House Impeachment Managers in a legal brief filed Tuesday.

Before we go even a step further: These are the same impeachment-crazed House Democrats who last year impeached Donald Trump for a phone call. A phone call where he casually asked Ukraine's president about the illicit Biden family activities there ... activities that we now know the FBI was already investigating.

These are the same House Democrats who spent three years insisting Trump was a Russian asset who colluded with Vladimir Putin to fix the 2016 election.

See, before November 3, 2020, it was not a crime -- let alone sedition or insurrection -- to question election results.

But that was so long ago, in what was the United States of America.

Read the brief. The Democrats claim Trump is "singularly responsible" for the riot

... even though he specifically called for a "peaceful and patriotic" march to the Capitol.

… even though the riot began long before Trump had finished speaking ... let alone long before those people in attendance had time to walk the distance down to the Capitol.

… even though the groups actually responsible had been plotting for weeks before hand, and the FBI knew about it, the Capitol Police were warned of it, Trump wanted more security down there, and the Capitol Police chief had been begging repeatedly for additional security ... but DC Mayor Muriel Bowser and Nancy Pelosi rejected the calls for help.

… even though there is proof that leftist anarchist agitators were on the scene to stir up trouble knowing Trump supporters would be blamed.

Still Trump is "singularly responsible" for what happened at the Capitol. No such responsibility is laid at the feet of the countless Democratic leaders who cheered on last year's "summer of love" rioting and celebrated the riots at the White House. Who called on protests to continue, and actually worked to bail out those who nearly burned Minneapolis to the ground.

Yes, I'm speaking of Kamala Harris and the Biden campaign -- who now sit in the same White House BLM and Antifa tried to take over last year.

Talking About The Election

So here's how the Democrats are getting around the whole time-travel element of Trump’s igniting a Capitol Riot before he even spoke about the Capitol. They claim in the impeachment brief:

The only honorable path at that point was for President Trump to accept the results and concede his electoral defeat. Instead, he summoned a mob to Washington, exhorted them into a frenzy, and aimed them like a loaded cannon down Pennsylvania Avenue.

Again, let's laugh at Democrats talking about honor, accepting results and conceding defeat. Even more hysterical: Donald Trump was soooooo successful at exhorting the “mob” into an insurrection frenzy, fully 99.99% of the people hearing him ignored him.

The impeachment argument is moronic on his face. Seriously, 99.99% people at the rally had no part in any unlawful behavior. Zilch. Perhaps the reason Facebook was so quick to ban videos and pictures from the rally was because an overwhelming majority of those present were posting happy, friendly -- and most of all peaceful -- images of themselves enjoying their day in DC. Having no idea what some thugs and agitators and bad actors were up to.

Here’s a third chuckle: A “loaded cannon”? Again these Democrats -- including Eric Swalwell, who could sleep with a Chinese spy and spill our secrets without punishment, then lead the Russia Hoax Brigade -- claim Trump hit a target before he even fired. Quite a feat. Meanwhile, the board overseeing the Marxist BLM, Inc., so loved by these same Democrats, features a woman convicted of bombing the Capitol. (Susan Rosenberg was later set free by Bill Clinton.)

Are you following? Talk about a “peaceful” protest and you’re firing a cannon at the Capitol. Hire somebody who actually bombed the Capitol, and they name a plaza in front of the White House after you.

One of the Great Lies

What elitist, insulting rubbish. Unlike the media and far too many Democrats, we don't need our talking points from the powers that be. Tens upon tens of millions of people saw exactly what was happening in the weeks leading up to the election, certainly on election night and also in the days after.

Donald Trump wasn't indoctrinating half the country, he was speaking for it:

We saw the rule changes that made mail-in voting fraud inevitable. We saw ballots show up where they shouldn't have. (Just ask my father-in-law in Jersey.)

We saw the $350 million Mark Zuckerberg was spending to help facilitate a dubious counting process. We saw the GOP observers blocked from observing or challenging ballots.

We saw the unexplained, coordinated stoppage of counting in states where Trump was storming to traditionally insurmountable leads. We saw the statistically improbable spikes ... all in Biden's favor.

We saw the number of outstanding absentee ballots suddenly increase in Georgia when even Democratic operatives thought Trump had the state wrapped up. We had Georgia officials lie to our face about a water main break ... followed by video proof of officials sending GOP and media observers on their way saying counting was done for the night, only to continue counting ... and recounting ... ballots pulled from under a table.

We had credible witnesses --average American citizens -- swearing out statements, insisting they'd seen or been forced to participate in illegal or irregular activities.

We saw the report of the forensic audit of Dominion machines in Antrim County, Michigan. Evidence the machines did connect to the internet. (How easily would be proven by Jovan Pulitzer in Georgia.) Proof the machines were set up to generate more adjudications. (Again, just like Fulton County, Georgia and elsewhere.) We learned the adjudication logs and security logs were deleted.

We saw the video of the election worker in Georgia demonstrating just how ridiculously easy it is to create votes out of thin air and change ballots.

We saw the peculiar situation where Trump won 18 of 19 bell weather counties. But lost. Where Trump's coattails resulting in GOP wins for every single toss up House race. But he lost.

We saw Trump lose Arizona, where he had 90 mile long car caravans and Biden and Harris together for their first campaign appearance couldn’t draw flies.

We saw vote buying in Nevada and 200,000 mail-in votes from those claiming they were “indefinitely confined” in Wisconsin. (That’s 158,000 more than in 2016. The Wisconsin State Supreme Court ruled that it was wrong for Democratic officials to instruct voters to use the “indefinitely confined” rule for COVID, which allows voters to avoid providing ID. And makes for easy pickings for ballot harvesting at nursing homes.)

We saw the astonishing situation where Trump won bellweathers Ohio, Florida and Iowa easily on election night, but narrowly lost neighboring Pennsylvania, Georgia and Wisconsin after days and days of counting and irregularities.

We stood perplexed as we were told the same guy the media spent four years telling us was a racist misogynist lost re-election because he was abandoned by white men. (Most notably, in heavily Trump counties where you couldn't find a Biden sign to save your life.)

When we simply asked for things to be checked out by neutral parties -- when we asked for explanations -- when we were asked to be heard -- we were told to pound sand. Sites and people sharing this information -- which the media, Democrats and their Big Tech partners labeled “misinformation” even before the election -- were deplatformed and silenced.

We saw massive and coast-to-coast efforts to intimidate those who came forward … including somebody shooting through the window of a Pulitzer colleague shortly after his testimony. (Please see this article: “Democrats Prefer Intimidation Rather Than Validation of the Election Results.”)

What's my point? Donald Trump wasn't telling anybody anything they didn't already know. He didn't rile up anybody.

Doesn’t necessarily mean the election wasn’t legitimate, but as Ricky Ricardo would say, “Lucy, you’ve got some ‘splainin’ to do.”

The Democrats Did Something Dumb

Meaning, Democrats have done something rather dumb. And Biden, by going along with it, is doing something even dumber.

The Democrats say Trump’s falsely insisting the election was fixed makes him responsible for the Capitol riot. The House Managers will expel a lot of hot air during the Senate trial talking about Trump trying to "overturn the election" with his "baseless" claims.

What's Trump's natural defense to that charge? "I had good reason to believe the election was fixed.”

In their legal response to the Democrats' brief, Trump's lawyers suggest that questions about the election will be part of Trump's defense. For example, the impeachment brief says Trump was trying to "overturn the election" by telling Georgia Secretary of State Brad Raffensperger to "find" enough votes to reverse Georgia’s results.

Trump's defense is that there’s a staggering amount of questionable activity. And as the full phone call proved, he was just asking Raffensberger to focus on a limited area of irregularity. Basically saying, "The difference is only 11,000 votes. I'm not asking you to turn the whole state upside down."

Trump’s been pretty clear he was perfectly happy to return to a life of fairways and fortune if he lost straight up. All he wanted was a true forensic audit, in specific, troubling locations, to determine one way or another.

They Opened the Door to Introducing Election Evidence

By pushing the "baseless" accusation argument, Democrats are opening the door to Trump using the Senate trial to force into the public record the information the media and Big Tech have been denying the American people.

In fact, the Washington Post claims that is why Trump shook up his legal team: To have at his side those willing to take on that fight.

While in the White House President Trump was surrounded by people who did not want to go to the mats. Perhaps worried about their own career prospects in DC post-Trump. (Read Patrick Byrne’s fascinating inside account.) But Citizen Trump need not heed such hesitant voices.

With this crazy impeachment, Democrats and Joe Biden have done something they may soon regret.

To borrow from the late, great Jim Croce: You don’t tug on Superman’s cape. You don’t spit into the wind. You don’t pull the mask off the ol’ Lone Ranger. And you definitely don’t give Trump another chance up at the plate.

Al Perrotta is the Managing Editor of The Stream and co-author, with John Zmirak, of The Politically Incorrect Guide to Immigration. You can follow him at @StreamingAl on Twitter and Parler, if his Twitter account is restored and Parler is allowed to again exist. You can also follow him @StreamingAl on Gab and MeWe.

The post Impeachment2021: Dems Claim Trump Pointed ‘Loaded Cannon’ at US Capitol. But Are They Shooting Themselves in the Foot? appeared first on The Stream.